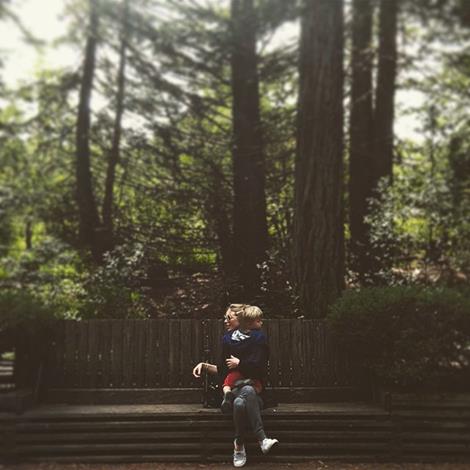 hanging out in the redwoods

This trip has not gone exactly as I planned.

I had this fantasy of what was going to happen: we were going to spend a couple of days looking at every house on the market in a good school district within our price range (which is a total of about twelve), then spend a couple of days making offers and dealing with logistics while also slotting in some fun – a trip to the Children’s Discovery Museum, maybe, or the pony farm at Half Moon Bay. (I’ll write about how the house hunting part went later; I’m feeling all superstitious and want to see how it comes out in the wash before I make any predictions.)

And then that “carsick” thing that I mentioned the other day? Turned out to be one of those 24-hour bugs. And on the way to urgent care with Indy at 7AM to make sure it was nothing more than that, I discovered that whoops, I had it too (and let me tell you: I discovered this in basically the most dramatic way possible; I won’t go into details because eww, but…EWW). So post urgent-care, we spent the day doing literally nothing while doing our best to inhale as much Pedialyte and water as possible, respectively. We did so much “nothing,” in fact, that it became actually kind of fun in its own way – our B&B was cozy, and airy, and there’s something to be said for a day of cartoons and not much else.

There was even one moment, right before we went to bed, when we were laying on the pillow and looking at each other and just smiling, and Indy reached out and stroked my cheek, in exactly the same way I stroke his when he’s feeling bad. It made the entire day – this whole trip, this whole move, this whole life – just…worth it. Kids have a way of doing that, right when you need it most.

After twelve solid hours of sleep, we woke up the next day all better, and drove up to Berkeley with Francesca and her brother, and it was so much fun: steam trains and ice cream sandwiches and shoulder rides and all that good stuff, so I was feeling super positive and like we’d ended the trip on a great note.

And then, this morning?

I missed our flight.

I have never in my life missed a flight. I can’t even explain it; basically what happened was that I switched out our rental car at the San Jose airport rather than the one in San Francisco, and I guess…I don’t know, I guess I just had it in my head that I was heading back to the San Jose airport. And it was four in the morning, and I was out of it and…I don’t know. It’s such a ridiculous thing for me to do. Anyway, what would have been a leisurely stroll to our airline turned into a madcap sprint to the airport we were actually departing from (SFO), and we did end up getting there in time, but not before our seats were given away.

Guess when the next flight we can get on is?

9:15PM. Just to be lay this out, that means that when we finally step foot in our house in New York, we will have spent a full 27 hours in transit, including FIFTEEN AND A HALF HOURS sitting in the airport itself.

When I realized this at 6:30 in the morning, as we watched our flight board without us, I cried. They were telling me that there were no standby spots for the rest of the day, and that we would likely have to spend the night at the airport, and I just…felt so furious at myself. It’s been a long, exhausting week for both of us – both physically and because of the not-inconsiderable emotions surrounding this move – and yeah, Indy has handled everything really well (even stunningly well), but still: I promised him we would go home today, and now we’re not, and I just want to pick him up and fly him across the country myself. I want him to feel safe and happy and like he knows where he is. I want him to be home, like I promised him he’d be.

So I cried. I apologized in advance to the agent for being a basket case, put my head down on the ticket desk, and cried. Because we missed our flight, and because my bags were making my shoulders feel like they were going to break off, and because I felt like a terrible parent, dragging my son down endless airport hallways. Because I miss my daughter so much I can hardly stand it. Because I wish I wasn’t struggling to find somewhere for my family to live in a town made for millionaires. Because I really wish I could just go home, too.

And then? I stopped crying, and dealt with it.

Because yes, I made a really stupid mistake, and this is definitely the kind of thing I specialize in beating myself up about, but what it comes down to is I’m the parent, and Indy is the child, and it is my job to make sure that he knows that everything is okay. Which it is. This obviously isn’t very much fun, but it’s also not all that terrible on the spectrum of terrible things that can happen, and that’s an important thing to keep in mind – and to make sure he keeps in mind, too. 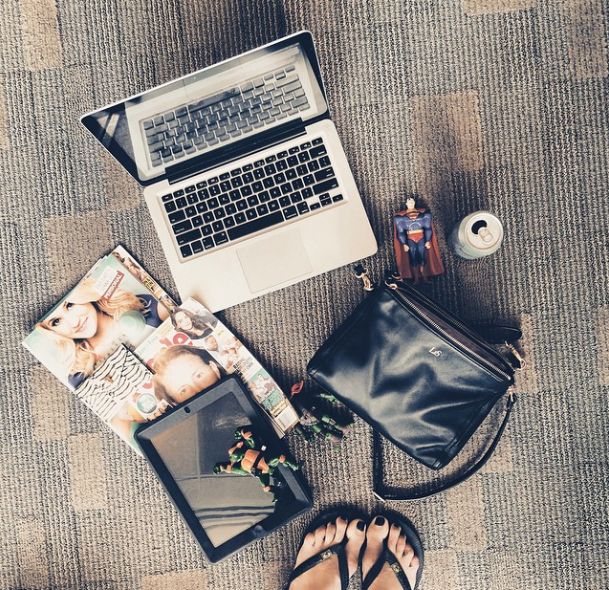 I made some calls and talked to the ticket agents, and we decided that it makes more sense for us to stay in the airport, in case a seat opens up on standby (which it won’t, but it’s not like we really have anywhere else to go anyway, since I already returned our rental car). I bought a day pass to the Skymiles Club, where we can eat and drink and nap. I googled “What to do in SFO with kids,” and it turns out our terminal has an aquarium, so that’s the afternoon taken care of. We bought a toy plane, and some orange juice, and downloaded a new movie.

I want my son to be home, in his own bed with his own toys, but even more than that I want him to know that wherever he is, he is okay, and that no matter what, I am with him and I will take care of him. I want him to know that it’s okay to cry if things feel overwhelming, but only for a second: after that, what you do is dry your eyes and figure it out. And mostly I want him to see the adventure even in the disaster. Always.

I screwed up, but people screw up. I got us stuck at the airport, but…people get stuck at the airport. I can’t change it, and the only thing that I can do is make the best of it. And so after I was done with my mini-cry, I took a deep breath and turned around and kneeled down in front of Indy, and asked him if he wanted to go on an airport adventure today.

And so that’s what we’re going to do.