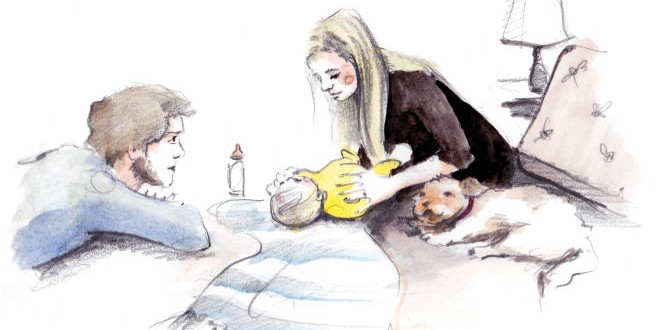 Kendrick and I are not getting along lately.

Just writing that – putting it out in public – feels scary.

And the reason why I’m writing it is that it shouldn’t.

One of the best things that has come out of this site is the fact that it’s sparked more intense conversations between my husband and myself than I can count. It’s gotten us talking about things we would probably never talk about otherwise, and forced us to be introspective in a way that I think we’re both proud of (and I want to be clear that he and I discussed this post, as well; I’d never publish anything personal about our family without making sure that he’s on board with every single word). But usually I wait until whatever issue we’re circling is over and in the past before I write about it, because before I start putting things out there, I usually like to know how they resolve. And that’s not the case today.

Before we go on: I also want to be clear that we’re not talking about an especially dire situation here. We’re not talking about a breakup; we’re talking about the kind of moment that every relationship goes through from time to time when you just kind of can’t figure out how to communicate the way you want to; you’re trying to say something, and your partner isn’t hearing you. And vice versa. The reason that I’m writing about this is just that we don’t seem to ever talk about these dips, because they’re frightening to admit to…even when the fact is that admitting to them – confronting them head-on rather than pretending they’re not there – is so often the first step towards resolution.

I had this boyfriend, back in Los Angeles, who had been married before, and who told me once when we were fighting that it wasn’t worth it to be in a relationship if we were going to have to try so damn hard. “Relationships,” he said, “shouldn’t be work.” I knew the moment the words left his mouth that our particular relationship wasn’t going to last (although of course I stuck around for a good eight months more, because I was busy learning other lessons at the time, like how to not be in a relationship with men who treat me badly).

Relationships are so much work.

And marriage? More work than you could have possibly imagined going into it. Because even when you find a person who you want to commit to for the rest of your life, that person who is your very best friend in the whole world…life is long. And when two people who may be similar but who are, let’s face it, two different people, try to coexist for months that turn into years and years that turn into decades, there will be periods when, for whatever reason, you just aren’t on the same page. I feel certain beyond a shadow of a doubt that Kendrick is the one human being on the planet who I should be married to – and vice versa – but that doesn’t mean that we float through life in a happy bubble of Isn’t This Great?!

Which brings me to what I’ve found is one of the very hardest things about marriage: you’re not really allowed to admit that yours occasionally goes through downswings. Because if you say “we’re not really getting along right now” alarms get sounded, and the advice starts pouring in. Friends get concerned, family starts calling, and all of a sudden you’re no longer “That Couple Who’s So In Love,” but rather “That Couple Who’s Having Problems,” that couple who gets whispered about at parties: I wonder how long they’ll last?

And those whispers – or rather the fear of those whispers – are so dangerous. Because they make you feel like you can’t talk about the reality of marriage, about the fact that things are not always perfect even in the very best of partnerships. But when you stay silent is when you start thinking that you might be all alone, you and your partner adrift in a sea of couples all more perfect for each other than you.

You have to talk about those fears. The fear that the romance will fall to the wayside, that your own dreams will get sidelined in favor of your partner’s, that you’ll end up in a life that’s less adventurous, or less calm, or less something than the one you’d hoped for….or whatever they are. Because when you start sharing those fears, what you discover is that everyone else has them too. They may be different than yours, but they’re there.

I love my husband very much. I love our family. And because this love is something that I talk about so often on this site, it is also so important for me to let you know that things aren’t always perfect. The “reasons” we’re not getting along right now aren’t especially ominous, or even especially important. They’re about who forgot to unload the dishwasher and about who didn’t listen to who and who’s responsible for this and who’s got to take care of that, but of course they’re not even really about what they’re “about,” if that makes any sense. They’re about the fact that we’re both sort of mucking our way through what is obviously a pretty stressful time in our lives. There’s too much to do, and we both feel like we’re doing it all (and like the other is not doing enough).

We want to feel safe. And I think each of us is spending a little too much time making the other feel unsafe at the moment.

My friend came over last night and we talked about this for awhile, and do you know what she said to me? It’s not about him versus you; it’s about both of you versus the problem. And she’s right, of course. The problems that arise in every life, in every marriage, are just that: problems to be solved. The goal is not to build up an impenetrable wall that says I Am Right; the goal is to come together to dismantle whatever gets in the way of where you want to go – especially when where you want to go is Forever.

So you know what I did? I wrote down everything that you just read. And sent it to Kendrick in an email. And in the email he sent back he said that he loved it, and I know by that he meant that he loved me, and he loves us, and that everything will be alright. And it will be, if we just keep working…and remember that so many things are less scary when they’re said out loud.