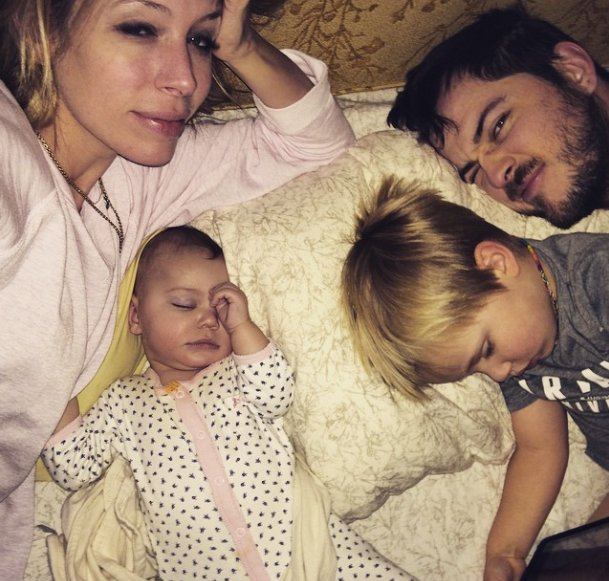 So many family sleepovers this weekend. (That’s all of us on my parents’ pull-out couch on Saturday morning.)

We spent Friday night in the city at my mom and dad’s place, and then headed to Francesca’s family’s house in Jersey on Sunday to spend the remainder of the long weekend with them. It was a little exhausting, not gonna lie, but it’s part of my whole “say yes” kick: pre-Goldie, we got in the habit of turning down invitations and staying home just because it seemed easier, but you know what? Once you get in the habit of running around with kids, it’s not nearly as overwhelming as it sounds. 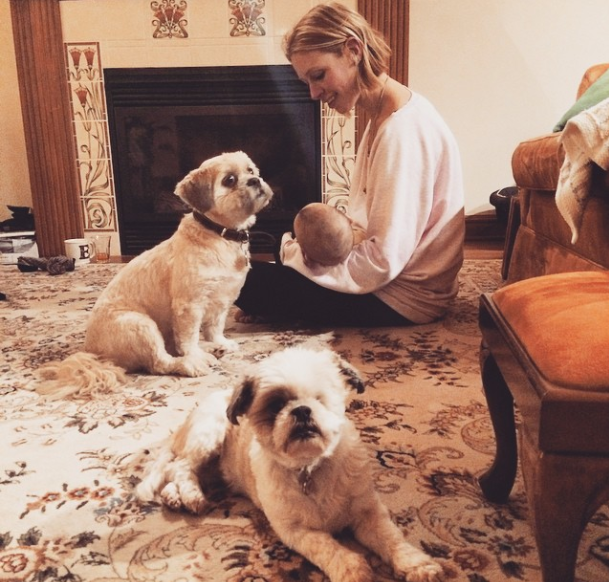 In the months since Goldie arrived, we’ve been traveling. To Boston, to Ohio, to Maine, to Philadelphia, to Jersey. We’ll be road tripping up to Canada in a couple of months, followed by The Biggest Trip Of All this summer. Now, the reality is that we’re a whole lot of houseguest – I mean, we’re talking a total of six creatures (including the optional dogs, who stay with a dog sitter unless their presence is expressly requested by those whose house we’re invading for the night) – so I’m pretty obsessive about following these definitive houseguest rules (including bring presents and clean up after yo damn self), but other than the worries about making our hosts crazy with our combined energy…I don’t actually worry about the concept of traveling with an infant and a toddler all that much. Certainly not as much as I anticipated I would before our daughter was born. If I forget an extra outfit, the child in question can wear the one from the day before. If not enough sleep is had, enough sleep will be had tomorrow. If someone cries, give ’em a Fig Newton; that’ll probably work.

It’s weird, just how quickly your mindset about this stuff can change. I remember a couple of weeks before Goldie arrived, Kendrick had a work thing over the weekend so I took Indy on a long day trip to a fairly far-away town, and I remember being sad, nostalgic for the moment even while I was living in it, because I felt certain that as hard as it was for me to run off on an adventure with a toddler, it would be impossible once we added an infant to the equation. Just the sheer volume of must-brings and must-dos seemed like too much to wrap my mind around. What if we forgot to bring bottles? What if one kid or another skipped a nap?

In the months since that day trip with Indy, we’ve done more adventuring than I could have possibly imagined. And we’ve skipped naps. We’ve forgotten diapers. Hell, we’ve forgotten diapers and carriers and wipes and strollers…all at the same time. But it been not only way less scary than I thought it would be…it’s been GOOD. Good for all of us.