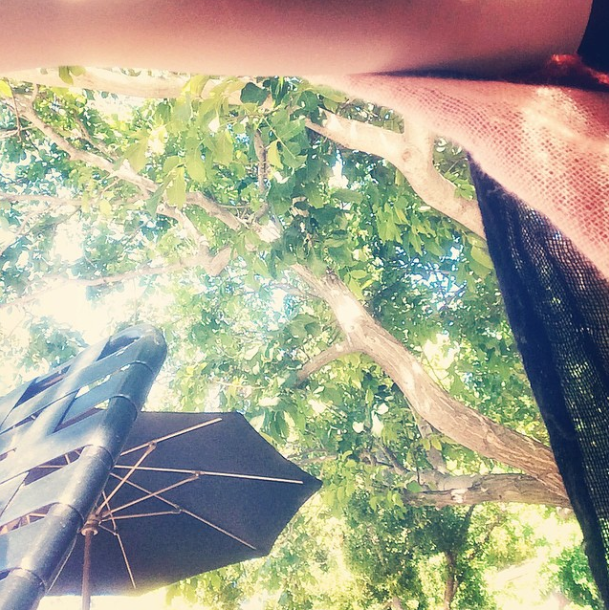 There’s a scene in Kate Atkinson’s Life After Life, a story of a woman returning time and again to live different versions of the same life, in which the heroine is just a baby, laying in a bassinet and looking up at the sky, comfortable and dozing. When I read the book I thought that was such a lovely image, and the kind of sense memory that I think we all have of our own childhoods: a hazy recollection that’s really more of a feeling – light on your face, carpet under your feet, the sound of someone singing – that seems like something you might have read in a book once, but that you’re pretty certain you actually lived, months or years before you could put words to it.

Yesterday afternoon, I was laying in the shade next to the pool with my daughter in a seat next to me, sort of halfheartedly reading and mostly watching Kendrick and Indy playing in the water. Goldie was so quiet I thought she was asleep, but then I looked down and saw that she wasn’t; she was just sitting there peacefully, looking up at the scarf that I’d draped over the seat to give her some extra shade and moving her fingers in little circles.

I watched her watch her world, and I hoped so much that that moment she was living might tuck itself away somewhere deep her mind, maybe come back to her in her dreams: sunlight filtering through a square of rainbow mesh, leaves rustling way up above, the sound of her mother turning pages next to her and her father and brother laughing and splashing further off in the distance.

I know she won’t remember this, any of this, but still: I like to think that somewhere in her will be a quiet memory of the life she was born into, the bubble of calm and joy that has been these last few weeks. So I took my phone and turned it around and set it next to her head, facing its lens up at the scarf and the trees and the sky, and recorded what she saw. One day, maybe it’ll bring her back.