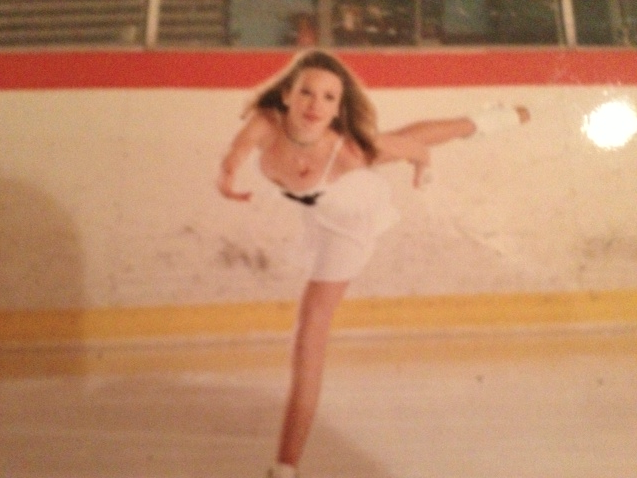 Here are two facts about winter sports of which I am absolutely certain:

1. You (or at least I) never, ever dress warmly enough;

2. That last run is always (always) a bad idea.

When I was a kid, I was very into winter sports. I was a competitive figure skater (above; I loved that dress) starting at four years old, my first crush was on a ski instructor who told me in passing that I had cute ears (which resulted in my not wearing earmuffs for the remainder of my trip; a poor idea that I have to assume made my ears much less cute), and while I haven’t been snowboarding since The Aspen Incident about four years ago, I’d really like to get back on a mountain sometime soon, because I really do love it. And (perhaps surprisingly) I’m pretty good at it. I can jump, anyway.

Sledding? Eh. I might be lukewarm on sledding mostly because I don’t have a ton of experience with it, because when you grow up in New York City a) it doesn’t snow all that much, and when it does snow, it rarely sticks; and b) the only real option for sledding is Central Park, which means a hike through a snowy city carrying a sled – a situation that, in my case, requires more in the way of motivation than an end-game of hurling yourself down a hill on a piece of plastic that you have zero control over.

But when it snows, and you have a toddler who’s never been sledding before…I mean, obviously: off you go. 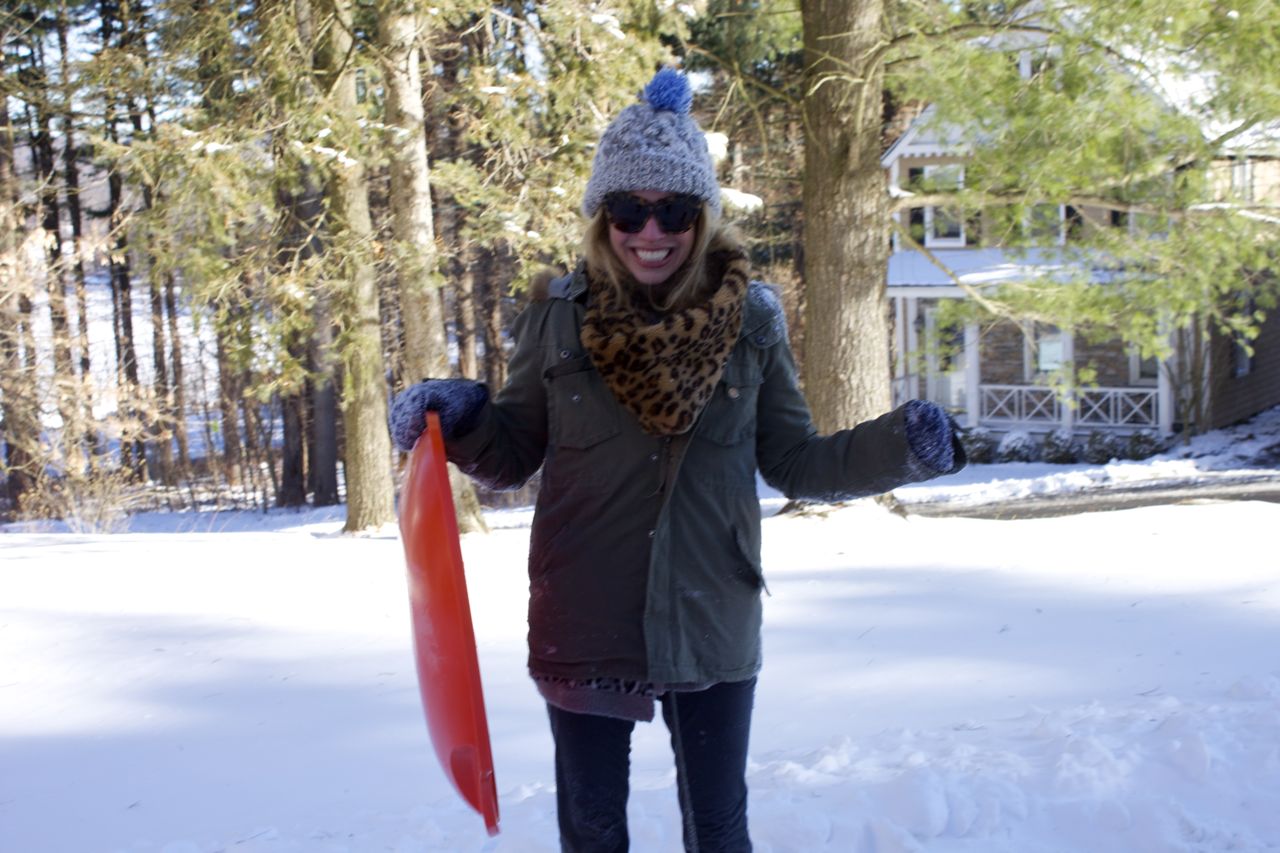 I solved Problem #1 (the Always Too Cold thing) by putting on every single thing I owned. 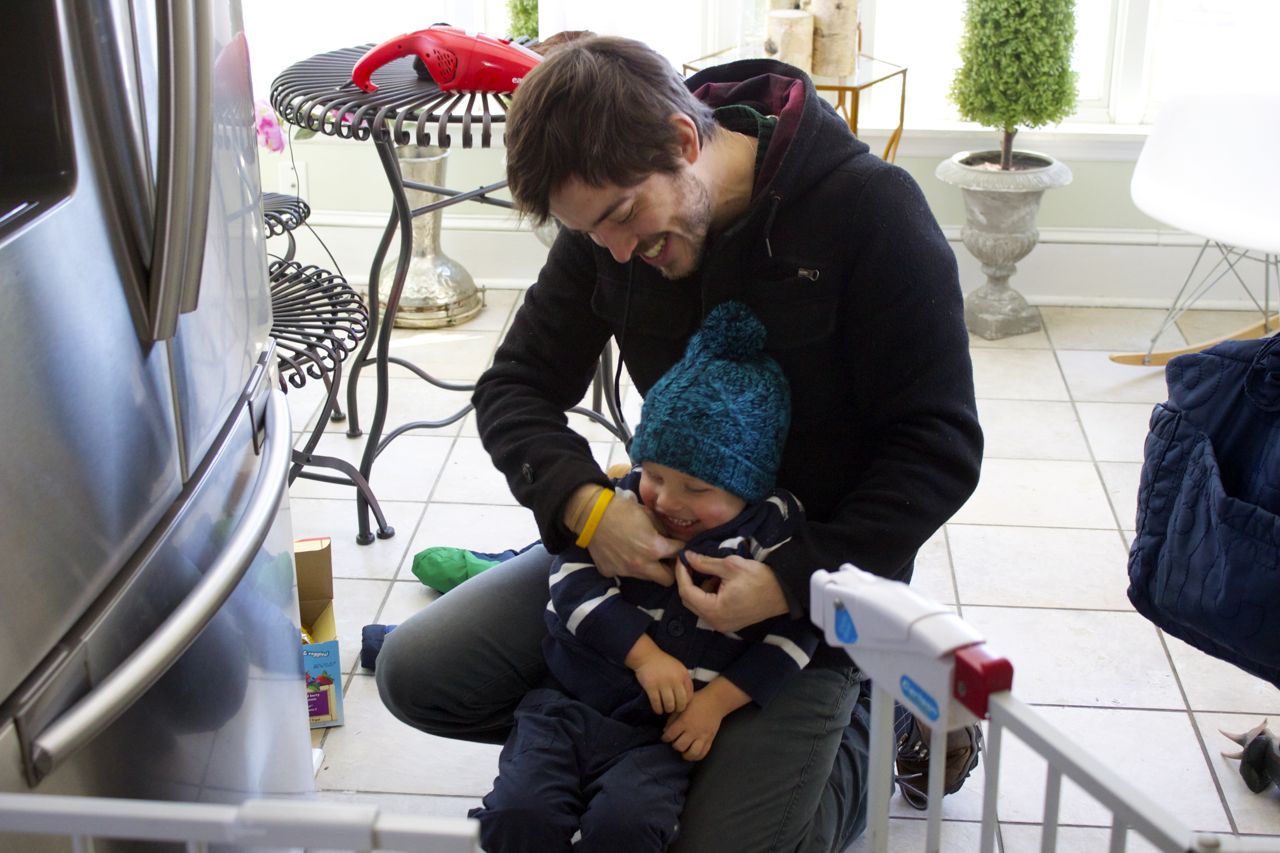 Our son did the same. (This part was fun; don’t worry, it gets more traumatic in a moment.) 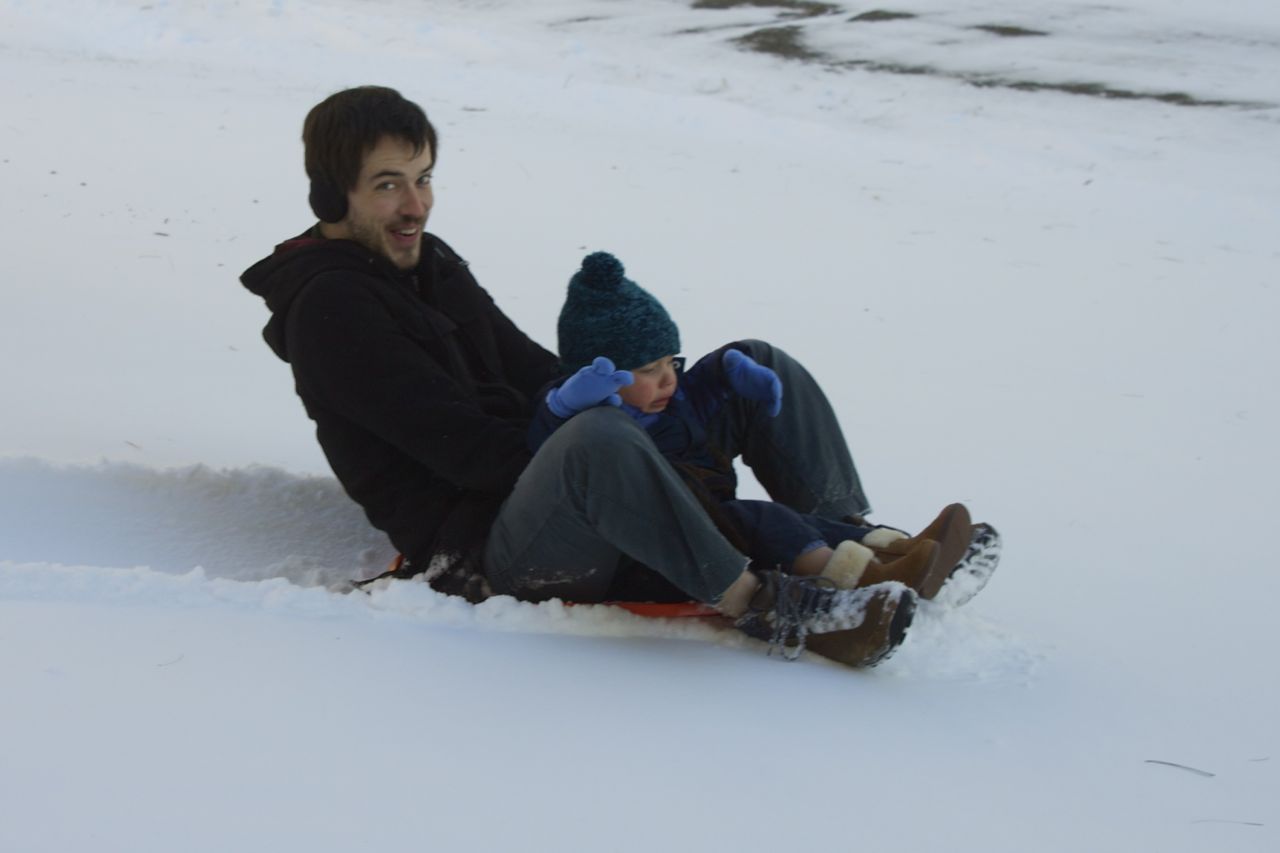 One trip down the hill seemed to be enough for Indy, thanks, so up onto Dad’s shoulders he went, much happier to watch the proceedings. 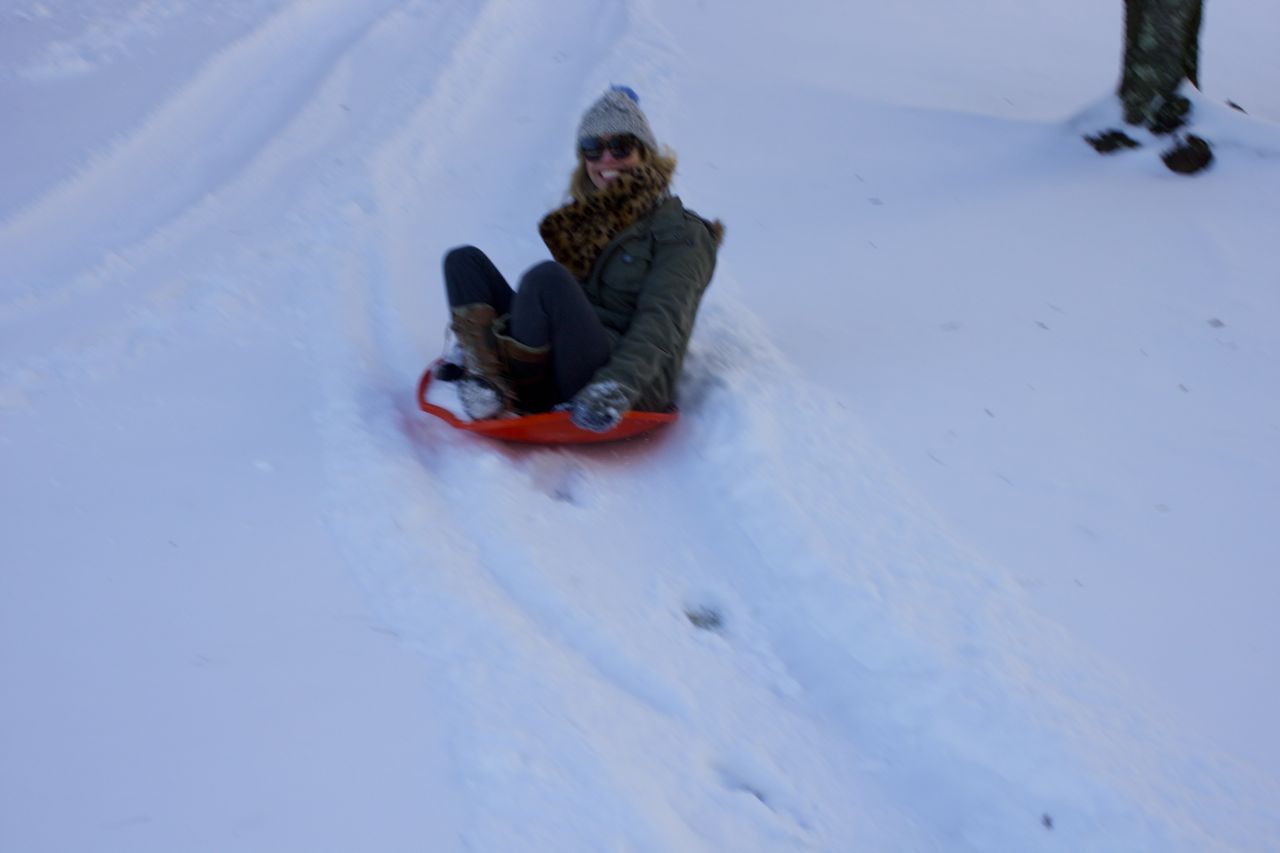 I took his place, and actually had a blast. So much of a blast that I completely forgot Winter Sports Fact #2, and fell prey to Kendrick’s encouragement to come on, honey, just do it one more time before we go in. 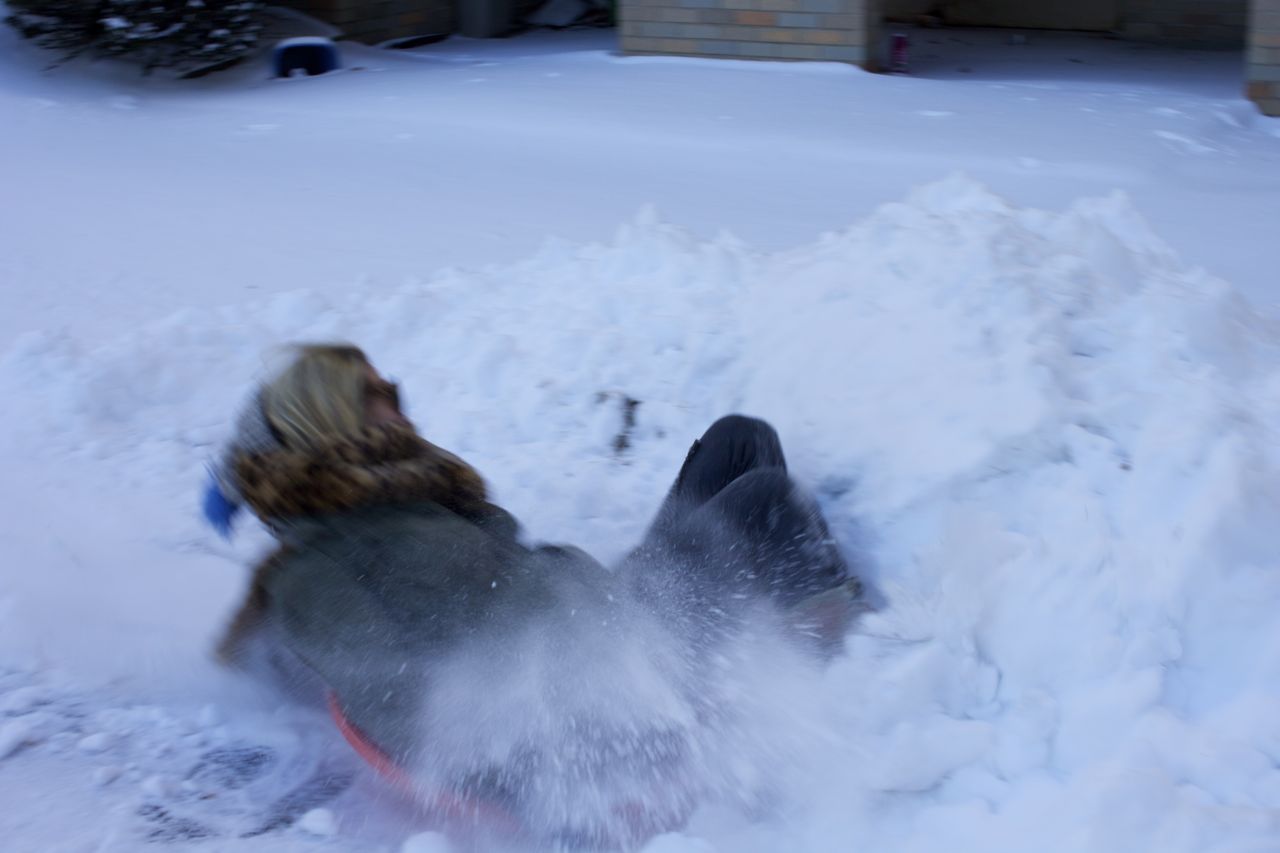 Moments after this photo was taken, I disintegrated into a state of total emotional collapse that involved actual top-of-the-lungs wailing and the words “Kendrick help meeeeee it’s broooooken”, and that was resolved about sixty seconds later when I realized oh, not broken, and stood up and walked home. I am still embarrassed for myself. 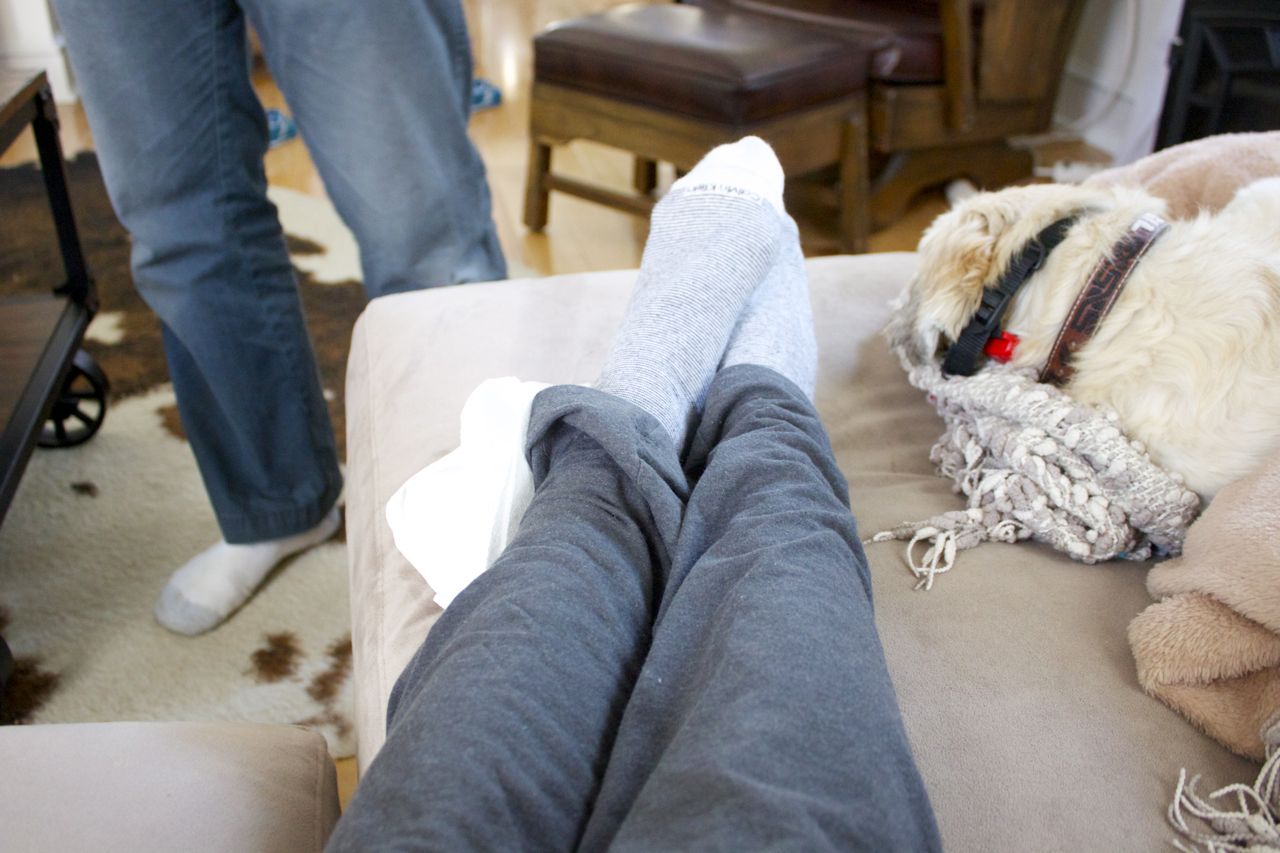 At least I was warm. (I’ll work on the avoiding-bodily-harm issue next time.)