Career Confusion And Getting It Done 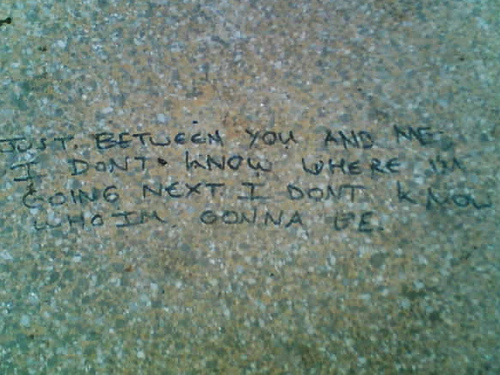 You’ve alluded several times to the fact that career time in your 20s was about figuring out what you wanted to do, not necessarily…doing it. My twenties are shaping up to be a complicated mess…and I’m wondering if you could help.

My original goal was to be a writer, but a few jobs into the media world I began to question this choice. I gave up writing to go back to school, and now I’m feeling like I never should have done so. Simply stated: I feel like I was put on this planet to write, but I have no earthly clue how to go about doing this.

I know you said that you went to NYU in a “very expensive moment of career confusion,” and I fear that mine is even more costly as I have invested my parents’ money and [a great deal of] time. How do I (or did you) get rid of the guilt and work up the will to start over?

Right now I don’t feel like I have the clips, background, experience, or qualifications for a writing gig. I guess what I am asking is how do I chase after it? As someone who is self-employed, I am sure this is a path that you are familiar with treading.

Let me know if you have any words of wisdom. Thank you!

A. The first thing that jumped out to me about your email was that it sounds like you’re having regrets about having stepped away from writing to pursue an education in an alternate industry, so let me first say: education is motion, and motion (even if it feels like you’re moving sideways at the moment) is always a good thing.

Going back to school, trying out a new field, experimenting with different career paths…always, always, always good. I mean that. Not only because it keeps your mind moving…but also because it helps you to dream up new possibilities for where you could be headed, and gets you away from whatever ideas about your future you got stuck on when you were fifteen (for me, that was being an actress; something I did not enjoy and yet needed a major life crisis to move on from).

My short-lived decision to pursue a Master’s in hospitality has virtually nothing to do with what I’m doing now, and had no concrete impact on my life whatsoever (other than the bill I’ll have to pay every month for another six years or so)…and yet I feel very strongly that it played a large role in my ability to figure out where I wanted to go, because it jump-started me out of a time when I felt so stuck and hopeless that I couldn’t even imagine being happy with or fulfilled by how I was spending my days. Just taking a step – any step – got my brain working again. And the simple fact that you’re working this hard to figure out what you’re good at and what you love means that you are the kind of person who doesn’t just wait for things to happen…you make them so.

This is the time in your life when you’re supposed to be figuring things out; it’s the fact that you’re continuing to push yourself that matters, not whether everything has fallen into place yet. It will, and one day you will look back on the twisting road that you took to get to the place where you are, and you’ll feel like it couldn’t have possibly happened any other way.

Now, what to do next. It makes sense that you’re anxious and feel like you’re struggling – forging a career in any unconventional path isn’t just “difficult”…it requires enormous tenacity and creativity. First, you need to be realistic about what working in a “creative” field really entails; I would encourage you to read this post I wrote on careers in the arts.

Next: if you suspect that you don’t have the qualifications to get a paid writing job yet, you’re probably right. You won’t get handed paid jobs because you “can’t” handle them – of course you’re more than capable of writing a piece just as well (or perhaps even better than) the next person – but rather because you have not yet shown your potential employers what you are capable of. You will probaby have to work for free, you will certainly have to take whatever jobs you are offered, and you will absolutely have to do them not just “better than expected”…but exceptionally. You need to prove yourself. And I don’t mean just prove that you can write…I mean prove that you’re one of the rare few that puts in the work, follows through, and get things done when they say that they will.

This is the most important thing I can say to you: I promise you that if you follow through and get things done, people will notice, and the work will come.

I remember right after I moved back from L.A. trying to get a job at a magazine and feeling so frustrated that no one was just handing me fancy writing assignments, when *obviously* I was capable of taking on whatever they threw my way. I mean, I knew that…so why didn’t they? Seriously: I couldn’t even get an unpaid internship. And it wasn’t like I was coming in with zero experience; I had published a cover article in a national magazine (one, granted, but still) at that point. It made me crazy; it felt like all these people were standing in the way of what I wanted to – knew I could – do. But I was missing the point, and the point was this: I needed to pay my dues not to prove that I was talented, but rather to prove that I was able to get it done, whatever “it” was. My belief that I should be handed opportunities “just because” wasn’t only self-important…it was flat-out wrong, because opportunities do not get handed to those who say they can do…they get handed to those who just do.

I suspect that if you want to pursue a career in writing, your talent is already obvious to the casual observer. What you need to do is be dependable, hard-working, thoughtful, generous with praise for those who help you on your way and respectful to even those who do not…and brave about what you choose to put into the world, because your voice is important. You know that already; now you just have to do it.

Careers In The Arts and “Taking What You Can Get”