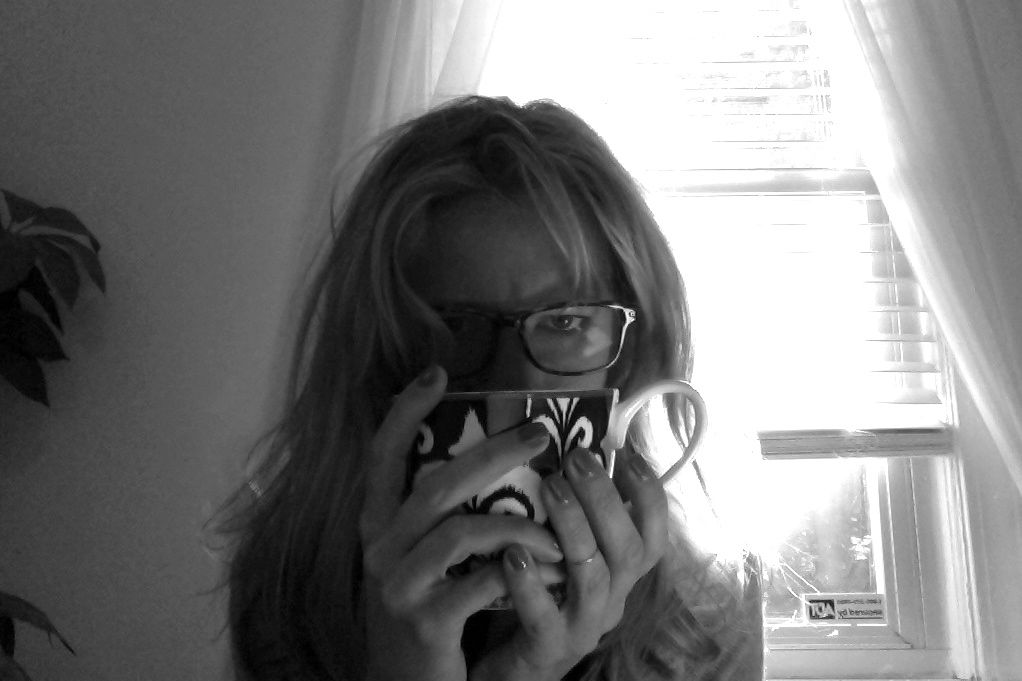 I wanted to show you exactly how fantastic I look this morning.

OK, so Kendrick was studying really late last night. And how late he stays up and why is none of my business, and besides: I’m excited for him and proud of him for being so hard-working and dedicated. But I have this thing – and I know I’m not alone here, because my friend told me it’s the same for her when her husband falls asleep on the couch or whatever and she has to go out and wake him up and get him back into bed before she herself can pass out – where I cannot fall asleep until Kendrick is in bed too. I can sort of doze, but if he is in the house I do not actually fall asleep until he is laying there next to me.

I try to let him know that this is my problem, not his – just another fun byproduct of my decade-long argument with Sleep – and he can of course do whatever he wants and stay up until whenever he wants, but I’m certain it’s still extremely annoying for him, feeling like he’s keeping his wife awake just by virtue of not deciding to go to sleep at the exact same moment she does. I explain my restlessness when he’s downstairs to myself as an anticipation of being woken back up when he comes into the room, but let’s get real: I’m sure it’s some kind of weird control thing.

Last night, he was still studying at 2:30 in the morning, despite the fact that he had to wake up at 5:30. Eek. (Let’s take a pause here and accept that however grumpy I look in that photo, he probably looks and feels far grumpier; I don’t know because he left a sweet note on our dining room table and took off for class hours ago.) But when he finally did come to bed around three, I decided that rather than finally falling asleep, I would have a huge anxiety attack that prevented me from sleeping at all until I finally heard the front door close around six, at which point I slept for one hour (until the strains of “ORANGE JUICE!” started emerging from the next room).

The reason why I have these weird middle-of-the-night anxiety attacks that often don’t even have anything to do with me (this one had to do with worry over Kendrick not getting enough sleep that night, which spiraled into worry over him not getting enough sleep generally and getting sick, which spiraled very logically into worry about EVERYTHING IN THE WORLD) has been something I’ve been trying to figure out for years. After I wrote this post about anxiety (which is very closely tied to my insomnia), I got in touch with a CBT specialist…and then promptly had to put our meetings on hold when our health insurance got thrown into upheaval a couple of months ago (long story; basically we ended up having to temporarily get insurance through Yale, which means driving to New Haven for anything doctor-related, which means that weekly appointments of any sort aren’t happening until we transfer our insurance back to a local carrier).

Anyway, now I’m reading this book, Where’d You Go, Bernadette, and I haven’t gotten to the end yet so I’m not entirely sure whether the main character is supposed to be sort of wonderful and eccentric or a total nut, but here’s hoping for the former….because when I read Bernadette’s description of her insomnia, it was the single most lucid explanation of what happens in my head in the middle of the night that I’ve ever read anywhere.

This is how she describes it:

So there’s a nice, melodramatic passage to start off your day. Whee!

It’s true, though: a creature that attaches panic to totally normal – even pleasant! – thoughts and sends my heart thumping practically out of my chest is EXACTLY what it feels like. I’ll come swimming mildly up out of sleep in the way that most people do every so often over the course of the night and have the vague thought “Indy looked so happy playing with that balloon today”, and that sweet little memory transforms immediately into “AND HIS CHILDHOOD IS FLEETING AND WILL BE GONE BEFORE I KNOW IT.” Thump thump thump.

You know what the best part of my single pre-insurance switchover conversation with the CBT therapist was, though? I told her about one episode I had when I literally did not sleep for a single second all night long, just sort of wandered the house growing more and more freaked out, carrying my pillow from our bed to the guest room to the downstairs couch to (yes) the floor of my son’s room in the hope that something calming in the atmosphere of one of those places would slow things down in my head enough to finally just let me sleep, and then finally the sun rose and that was that and my day had begun…and you know what she said?

“That must be really hard.”

And I could hear it in her voice: she wasn’t making fun of me for having what’s really not that big of an issue in the grand scheme of issues that people can have (which is true, I know), or belittling how frightening all those hours alone in the dark with thoughts that grow more irrational by the second can be. She meant it.

It made me feel so much better.

And reading about this Bernadette character – however it turns out we’re “supposed” to see this woman, whatever (mis?) deeds she ends up committing over the course of this book – that makes me feel better, too. Because forget about the character: whoever wrote this book clearly has experienced this – you’d have to have experienced it to write about it with that much spot-on-ness – and gets what it feels like.

Writing about it always makes it feel better, too. I love that about having this site. I love talking to you.

So now I guess it feels like a good morning after all. Today’s vent has come to an end; off for more coffee (and then more); lovely day ahead.