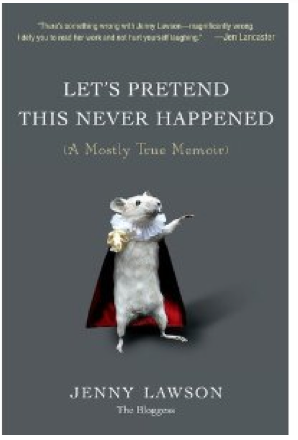 Now this is an apology.

Summary, if you haven’t heard the story: Jason Alexander went on Craig Ferguson and made a joke calling the game of cricket “gay”, with some accompanied (effeminate) imitations of the way that the ball is thrown (pitched? hurled? I know nothing about cricket). Of course, he was called out for his statements…but the apology he made went far beyond what you’d expect.

You know what I found most interesting about the apology? In it, Alexander addressed those who would call negative reactions to his words “oversensitive.” And this got me thinking, because I agree to some extent that as a society we’ve gotten so precise in our political correctness that making a joke can feel like traversing a minefield – you’re always going to offend someone.

In fact, I’m reading Jenny Lawson’s Let’s Pretend This Never Happened (go read it immediately; it’s one of the funniest books I have ever read and I’ve been cackling over it in bed every night while Kendrick looks at me like I’m a crazy person), and in the preface Jenny addresses this very issue:

“I apologize in advance for [rambling], and also for offending you, because you’re going to get halfway through this book and giggle at non sequiturs about Hitler and abortions and poverty, and you’ll feel superior to all the uptight, easily offended people who need to learn how to take a fucking joke, but then somewhere in here you’ll read one random thing that you’re sensitive about, and everyone else will think it’s hysterical, but you’ll think, ‘Oh, that is way over the line.’ I apologize for that one thing. Honestly, I don’t know what I was thinking.”

Now, I really appreciate a good, insensitive joke. I also am terrified about making said jokes to anyone other than…well, Kendrick. Because I’m also very much aware of how devastating one person’s idea of “humor” can be to the target of a joke, and not hurting another person is more important to me than getting a laugh.

And, as Jenny suspected of her readers, I also have fairly arbitrary guildelines in place in my own head that tell me when – to me – something has gone “over the line.” But the key word there is “arbitrary”; to each his own. What I found most enlightening about Alexander’s apology was that he explained why his statements fell outside the bounds of innocent humor, and were not something to shrug off as mere comedy:

“It is not that we can’t laugh at and with each other. It is not a question of oversensitivity. The problem is that today, as I write this, young men and women whose behaviors, choices or attitudes are not deemed “man enough” or “normal” are being subjected to all kinds of abuse from verbal to physical to societal. They are being demeaned and threatened because they don’t fit the group’s idea of what a “real man” or a “real woman” are supposed to look like, act like and feel like.

For these people, my building a joke upon the premise I did added to the pejorative stereotype that they are forced to deal with everyday. It is at the very heart of this whole ugly world of bullying that has been getting rightful and overdue attention in the media. And with my well-intentioned comedy bit, I played right into those hurtful assumptions and diminishments.”

And that’s it, exactly. It’s not about whether you have a sense of humor or you don’t – it’s about understanding how something that to one person is nothing more than a comedy bit can be something very different – very damaging, and very dangerous – to another. Then you can choose to make your joke – or not – but at least you’re not ignoring the very real fact that words can hurt, and that their repercussions can extend far beyond the moment when they’re uttered.

What do you think about Alexander’s apology?