On Security, Struggle And “Settling” 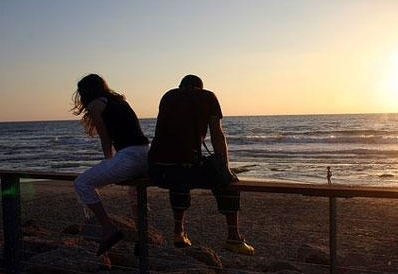 Today’s question comes from one reader in particular…but I’m publishing it (with her permission) because it’s a question that I’ve received in one form or another so often, from so many of you. I’m saying this not to diminish the importance of these feelings; quite the contrary, I’m saying that I’ve felt like this, and I know it feels lonely, and I also know that if you feel like this, you are not alone.

I’m not really sure how to start an e-mail like this, even though I’ve been reading your blog for a long time now and feel like I “know” you. All I can say is that I’m at a point in my life where I’m feeling so lost and confused that for some reason I feel compelled to reach out to you, especially after your recent post recapping your engagement and whirlwind romance with your now-husband.

I’ve been with my boyfriend for five years, [and] we’ve built a pretty solid life together. About a year ago we started moving steadily towards engagement, and about six months ago he went an bought a ring. Knowing that the proposal was coming, something inside me snapped and I started to panic.

Something has always felt “off” in our relationship, like something was missing. What scares me is that while I love him so much and our relationship shines in so many ways, I don’t know that I could ever love him in the can’t-live-without-you [way]. I guess what scares me is the indecision of it all, wondering if I’m throwing away a really good, solid, stable relationship because I’m chasing the pipe dream of something great, something more than what I have right now. I so desperately want to feel the things for him that I don’t right now, but I’m not sure that I ever will.

I know that at the end of the day I’m the only one who really knows what it is that I’m feeling, but I guess what I’m hoping so desperately for is that you will share with me if, in your experience, that full-spectrum love exists. I know that you’ve mentioned that you were in a serious relationship in the past that ended, and when you met your husband something about it just felt right, felt different than what you had before. And I guess that’s what I need to hear right now: is that there is a difference between loving someone but still feeling empty, and finding someone who makes you feel complete.

A. This is a tough situation that you’re in. And you’re right: of course no one save for you can say for sure whether this relationship is right for you, and I don’t want to tell you what you should or should not do, but you wrote to me for honesty. And so here’s what I think.

I’ve actually been in three long-term relationships that at one point or another seemed to be headed in the direction of marriage. In one, I contemplated marrying a guy because he was great, and we were best friends, and he would have given me a “good life” and stability and all those nice things that don’t necessarily add up to true love. In the others, I came close to engagement because I felt, for one reason or another, like I had to: with one man, it was because my job and the life that I had been building felt contingent on the success of our relationship (and because I remembered how our relationship had been in the past, and always held out hope that we would return to that incredible time, though we never did), and with another man it felt like I had given up so much to be with him (the aforementioned relationship, job, and life) that to not marry him was tantamount to admitting that I had made an unspeakably enormous mistake.

Look: people choose to get married (or not) for all sorts of reasons. Happiness can be scarce enough in this world, and long as a person’s choices bring him or her joy, then that’s really great. I mean that. And there’s something to be said for prioritizing companionship in life, even if that companionship doesn’t come in the package you may have expected or hoped for. But it doesn’t sound like that’s the way your priorities lean, and it’s not the way mine do, either.

To my mind, there is no reason to marry someone other than the belief – the full, wholehearted, all-of-you certainty – that you really, really want to (I originally said “must”, but I think the key element here is desire, not destiny). That you have met someone who recognizes those parts of you that no one else in the world even sees, and whom you recognize in return. This isn’t to say that things are always blissful and dreamy – there have been times when my relationship with Kendrick has grown so rocky that we’ve both struggled with it, for sure – but there has always been the strong, steady knowledge that no matter what happens, we were made to hold each others’ hearts. There is no one on this planet who would hold mine with such care as Kendrick does; that’s just the truth.

Another truth: marriage is very, very difficult. Those people who say “relationships shouldn’t be work”? I’m always hesitant to judge others’ perspectives, because to each their own, but in this case I’m pretty prepared to say: nope, that is wrong. Relationships – especially ones that last decades – are hard. Marriage is hard. And it’s hard – often harder than you were prepared for – with the person that you are truly, deep down, meant to be with. With anyone else, it would be impossible. I believe that.

Did you ever read my post called Love And Living Rooms? In short: there is no checklist in the world that I could reference to explain why I married Kendrick. I married him not because he fulfilled some needs of mine; I married him very simply because he is him, with everything that means (and doesn’t mean).

Whole-heart, all-in love exists, but it’s not glitter and rainbows: it’s real, and it’s a struggle…and it’s all worth it. It’s not the swoony romance of those early months or years; it’s sometimes that, too…but mostly it’s much more: it’s caring for another soul the way you care for yourself, and experiencing the certainty that you are cared for in that way in return. And I would encourage you to look for that, because it’s not something that you want to miss out on. Even the hard parts: they’re so good, and so very very much the point of it all.