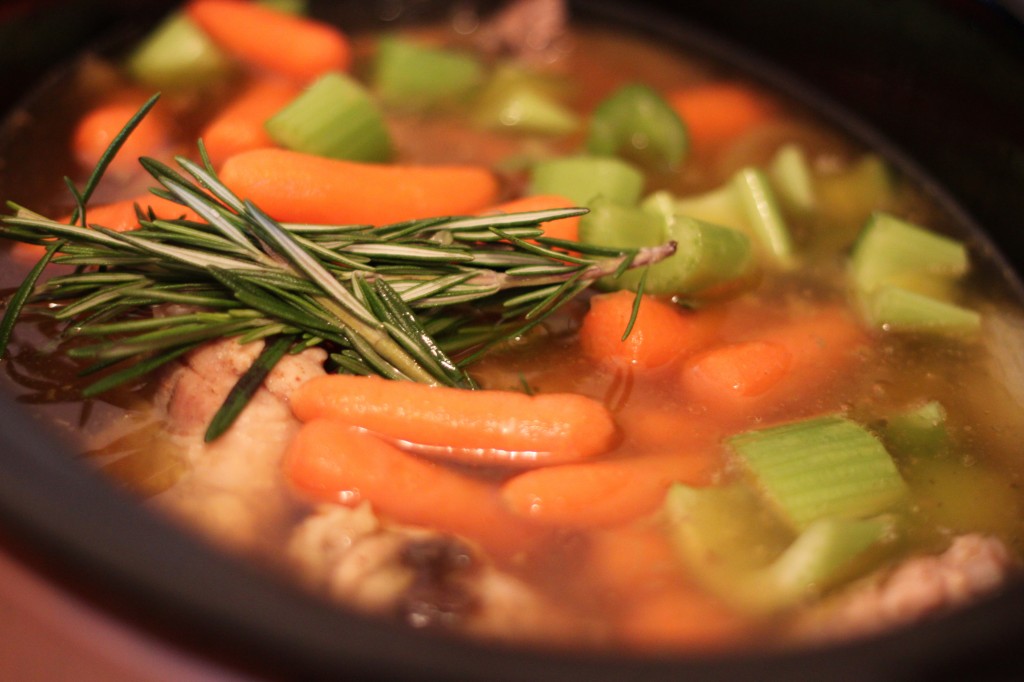 I know, I know: I’m obsessed with my slow-cooker. But the recipe that reader Ali posted sounded too good not to make immediately.

2. Place chicken in slow cooker with onion, chicken broth, and beer (the liquid should almost – but not quite – cover the chicken).

3. Cook on low for several hours, or until the chicken meat falls from the bone. About an hour before you think it’ll be done, add the rest of the vegetables and the rosemary (if you prefer a strong rosemary flavor you can add it at the beginning).

4. Remove skin and bones from pot; skim fat off of top if needed. You can thicken the sauce with a little flour if you prefer a more stew-like consistency.

5. Season to taste with salt and pepper, and serve over rice.

Now for some pros and cons. Although the chicken was incredibly juicy and tender, the meal was a touch bland – I ended up adding soy sauce to my portion, and Kendrick hot sauced his into oblivion (but he always does that). Next time, I’m going to add more salt and switch out the chicken broth for a can of crushed tomatoes (the alternative Ali recommended). I’d also halve the amount of rosemary I used because I’m not a huge fan of the stuff…but if you are, definitely go for 2-3 sprigs for some nice strong flavor.

This also makes awesome leftovers: I just had some for lunch rolled up in a soft tortilla with a little shredded cheese.