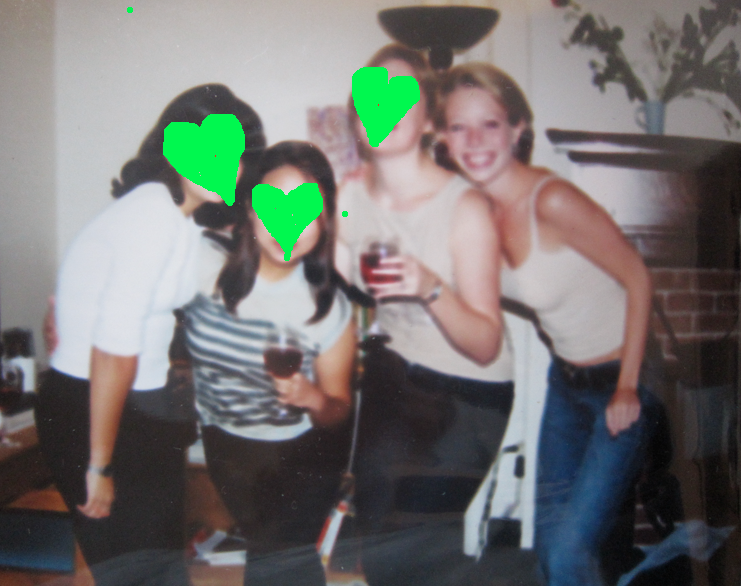 Q. I’m curious about your experience at Harvard! Please tell us more about it, esp. in light of all the “Social Network” fever. 🙂 I would love to hear a “real” person’s opinion re: the whole social stratification/Harvard experience. Thanks much. – Melissa

A. First…I haven’t seen The Social Network yet. I’m dying to, but Kendrick is housebound for a few days, and I’m waiting until he gets better to see it with him. Based on my relatively limited knowledge of the film, though, here’s what I can tell you: I wasn’t friends with Mark Z, but I do remember hearing a bit about this Facebook thing during my senior year. That’s really the extent of my experience with Facebook/the Zuckerbergs, other than having met Randi (who’s really nice) a few times earlier this year.

Re: final clubs (which, again, I’m assuming figure prominently in The Social Network), they’re pretty much what you’d imagine. Some are just eye-rollingly pretentious (the guys in the Porcellian really won’t admit that they’re members, which made me never want to hang out with any of them, ever), and others are more or less basic frats (my boyfriend’s “punch” included running around campus dressed only in Saran Wrap, getting too drunk to speak…the usual, I guess). Each one definitely has a very specific character, and there’s a lot of (extremely justified) anger about the misogynistic, elitist nature of it all: the clubs are all-male, and there are – or at least were when I was there – only a couple of similar organizations for women. And the guys in the clubs can basically admit whoever they like both as members and as guests…which means that getting in is a matter of knowing someone inside, or being someone who someone inside wants to get to know.

With regards to social stratification on campus…honestly, it’s not something I noticed much of, although I’m sure it existed. Actually, what I saw – at least in my friend group – was that money mattered very little; how smart, interesting, and friendly you were seemed to be of much greater significance. For the most part, my close friends didn’t come from wealthy backgrounds, and a big percentage of them were there on scholarships (I wasn’t, but I paid all of my own expenses – same as I did in high school – with money I made acting and bartending). Sure, there was a monied, New York-y group, but I was only friends with a couple of people in it (despite having known a lot of them in high school), and didn’t really hang out with them socially. In other words, I’m sure the flashy, drug-filled, whose-parents-are-richer scene that I imagine they show in the film exists, but I wasn’t a part of it. I also read every single page of every single book that I was assigned in all four years, so I didn’t have a ton of time for getting into trouble.

Above, what most weekend nights consisted of: drinking Hornitos and holding little dance parties in my room with my three best friends (above, a fair representation of an average evening). Sometimes we’d go out to Bertucci’s for pizza and rolls, and occasionally we ventured over to my boyfriend’s final club (the A.D.) to play beer pong or dance around some more. I loved Harvard; to me, it was a near-perfect – and pretty innocent – college experience. That’s not to say that nothing bad ever happened, or that I didn’t see questionable things, but nothing more scandalous than I imagine you’d find on any college campus.

One other Harvard-related side note: have you heard about Marc Hauser, the animal cognition specialist and Harvard professor who was recently cited for eight counts of misconduct? He was my direct supervisor at Harvard (my “mentor,” actually, although I didn’t experience a ton of direct professor-student interaction). I worked in his primate lab for an entire semester, doing research on antiphonal calling in cotton-top tamarin monkeys (basically playing different sounds for them and seeing what they responded to). I didn’t know him well – he was sort of one of those rock-star professors that everyone got all nervous around – but I was shocked to hear the allegations nevertheless.

Again, since I haven’t seen the movie I’m not sure I answered your question, but if there’s anything else that you’re specifically interested in, let me know!