Working With What You Have: Cooking Together 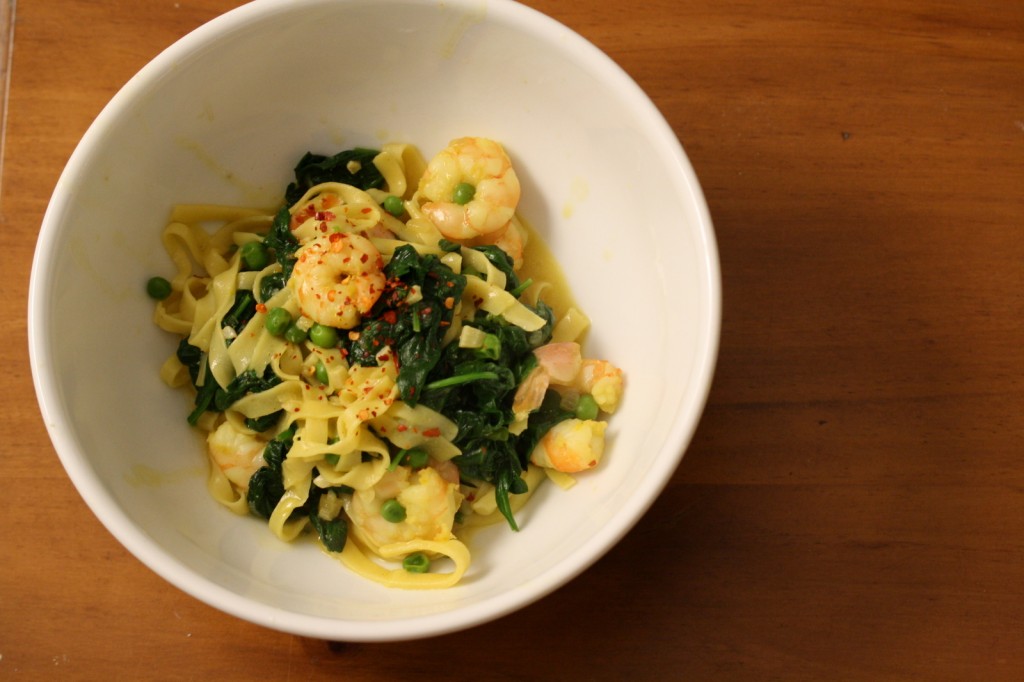 Alex, my boyfriend, and I don’t eat dinner together that much because of busy schedules and whatnot, but we have gotten into a nice rhythm when we do. Though I most often do the cooking, he takes part in the meal planning and ingredient acquisition. Sometimes, as I mentioned in my post on Chana Bateta, he’ll actually give me a food related gift: a new set of spices, in that case, or some good quality olive oil, in others, but in the end he’s not a guest, obligated to bring a bottle of wine. Our dinners are shared events. Alex does actually cook, for himself many nights–or for me, most recently, a wonderful Greek roast chicken with potatoes. In the end, cooking together is prevented by the fact that that my kitchen is literally big enough only for one.

Sometimes, when we’ll be eating together and I’m unsure of what I’m craving, I look to Alex for the inspiration that my fridge and pantry doesn’t seem to be giving me. I’ll give him a rundown of ingredients on g-chat, and then he’ll offer up a suggestion. Fortunately, what he wants often satisfies me too; that he likes potatoes, beans, quinoa, and other simple preparations makes it easy to cook for him without going out to shop. Though he’s perhaps less meat-centric than many men, he can be just as veggie averse.

For example, once when I’d made an enormous pot of borrachos from Last Night’s Dinner’s recipe on Food52, I carried two servings of it over to his apartment in tupperware. Then we made the accompanying cornbread out of his pantry’s ingredients—only I brought the egg, as he had run out. We had warm cornbread and warmed borrachos, and it was delicious, very much a joint effort. What’s more, two people can fit in his kitchen, so while I measured and mixed, he poured the beans into a pot with some extra water and heated them through.

One Friday night, Alex had a long day of work. I’d had a long day of writing and mozzeralla sandwich eating, and I had no clue what I wanted to eat, nor was I all that hungry. He called from Grand Central before he got on the train to give me the items in his fridge: spinach, about to go bad, he reported, and frozen shrimp. Excellent.

I took stock of my own kitchen. I had 5 egg yolks sitting in the fridge from making several batches of brutti ma buoni earlier in the week, and so while he was on the subway, I made fresh pasta, figuring shrimp and spinach couldn’t not go with it. When he arrived, I noticed immediately that the frozen shrimp he had brought, while of an excellent size, were neither cleaned nor deveined. We stood side by side in my kitchen—the only way you can stand in it—and peeled and cleaned them. In fact, the shells wound up enhancing the dish, since they became part of a saffron-enriched stock that flavored it.

Dinners like this are not quite as eventful as when Alex purposefully tries to make cooking competition-like. To the contrary, they are organic and in a way mundane, a “working with what you have” with two fridges, two stomachs, and two sets of tastebuds.

From my kitchen, where cooking together makes the meal taste better, to yours,

You can use pre-shelled, pre-cleaned shrimp. Then, substitute pasta water for the quick shrimp broth (you’ll have to make the pasta slightly earlier than otherwise, but it’s no big deal, since it reheats in the sauce anyway).

Peel the shrimp. Combine the shrimp shells and 1 cup of water in a small stockpot. Bring to a boil, then turn heat to low and simmer, partially covered, for about 10-15 minutes, while you do the other prep work. Strain, discarding the shells, and stir in the saffron until it dissolves. Set aside.

Bring a pot of very salted water to the boil for the pasta.

In a large pan, saute the garlic and shallots over low heat until just golden. Add the red pepper flakes a minute or two in. Add the wine and salt, turning the heat up slightly. Let the wine cook nearly off, then add the shrimp-saffron stock you’ve just made. Bring to a boil, then throw in the peas and the shrimp. Stir to mix everything together, then cook for about 30 seconds. Finally, add the spinach (this will fill up the pot), and toss everything together. Lower the heat and cover the pot for 1-2 minutes until the spinach is wilted and the shrimp is cooked through. Taste for salt and add any more as needed

Make the pasta about when you add the shrimp and peas—fresh pasta only needs a minute or two to cook. Drain, reserving a little bit of water in case the sauce seems dry.

Stir the pasta into the pot of shrimp and vegetables, and toss to distribute all the ingredients. Stir in the butter, if using, then serve immediately in big bowls sprinkled with a few extra red pepper flakes.

Using the food processor is a less authentic way than most of making pasta. But it keeps your hands a bit cleaner, and if you give the dough a couple extra minutes to rest, it’s just as pliable as dough made by hand.

Combine the flour, egg yolks, and 1 tablespoon water in a food processor. Pulse to combine. If the dough comes together into a ball, then just pulse a few more times and remove. If not, add the water slowly until it does. Then scoop the dough together and knead for about 5 minutes on a lightly floured surface. When it’s done, the dough should be smooth and just barely sticky. Wrap in plastic and set aside for an hour.

Cut into four pieces. Roll each until it’s thin enough that you can see your hand through a sheet held up to the light. Fold into thirds, then use a sharp knife to cute strips of desired thickness. Unfold each strip and lay out on a cornmeal-covered cookie sheet. Cover with plastic wrap as you repeat with the remaining three pieces of dough. You can refrigerate leftoevers for a day or two, or freeze for several months.

Cook in lots of boiling salted water for about 2-3 minutes.