Over the past three years (since I moved back to NYC), I’ve lived in two different rental apartments. Kendrick and I were in the first, a virtual closet in Hell’s Kitchen, for two years, during which time we did exactly zero to the space. Even though there were easy little changes that would have made the place a whole lot more livable (a bright color on the living room walls, a ceiling fan installed in the bedroom, curtains instead of the vertical blinds that came with the apartment), I never did anything, because hey, it was a rental, and I didn’t want to spend my money on improvements that would only end up getting bequeathed to the next tenants.

This is one of the major mistakes that renters make: refusing to put time and effort into their apartments because they don’t own them. You’re going to spend a year of your life – more likely two to three, because we all know that moving is absolute hell – in those few hundred square feet…so why not put a little money and time (notice I said a little) into making your present living space a bit more “you”?

Take Melissa’s place, for example. It’s a rental, but this is her first time living on her own in awhile, so it was super-important to her that her apartment feel like a real home. For assistance, she called in interior designer Jami Supsic…and the results were absolutely stunning.

This is the roof deck: with the addition of just a few key pieces from Ikea and Lands End, they were able to create a gorgeous outdoor living room that’s both chic and cozy (and green – notice the solar lamp in the upper-left-hand corner?). 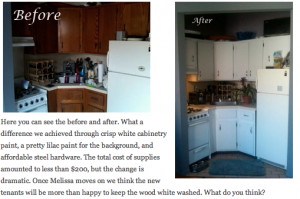 I also love the quick DIY fixes that they used to spruce up the kitchen: with just a little whitewashing and a coat of lilac paint on the walls, Jami and Melissa made the area look sparklingly brand-new.

Some quick fixes worth spending a little time and money on:

– A ceiling fan makes a world of difference in terms of the feel of your apartment, and isn’t all that difficult to install as long as you already have a central light fixture. They don’t have to be boring-looking, either; how cool is this one?

– A coat of bright paint on a single wall can make the entire apartment feel brand-new (you may also want to just paint the moldings; this is a super-quick way to give a room some character).

– Curtains do wonders to soften a room, and you can find amazingly chic styles at incredibly low prices (oh, do I ever love the Waterfall Ruffle curtains at Urban Outfitters). I also have a soft spot for spectacular tie-backs, which you can totally take with you when you move.

And some improvements that you absolutely should not spend a single cent on:

– Re-doing your floors. This is way expensive, and you may be able to convince your landlord to do it for you, especially if there’s significant damage like loose boards or holes.

– Kitchen appliances. They’re just too cumbersome to lug around with you from place to place, and most apartments come with them already installed. I know, I know – your stove sucks. Mine does, too. But chances are I’m not going to take it with me when I move, and so unless I can convince my landlord to send a new one my way, it’s staying put.

– Major plumbing/electrical issues. Check for these before you move in, but if any problems arise in these areas over the course of your lease, they are 100% the owner’s responsibility.