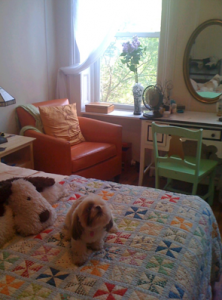 I wrote the below post last summer, a couple of months after Kendrick and I moved from Hell’s Kitchen to the UES, and got to thinking about it last night because a) it’s been almost a year, and I’m still completely in love with our place, and b) it’s one of my favorite pictures of Lucy ever.

I LOVE my new apartment. The first two years after I moved back to New York, Kendrick and I lived in a 300-square-foot one-bedroom in Hell’s Kitchen. It had a dishwasher, which was great (the new place does not), but 300 square feet does not a functional relationship make. And Lucy (pictured, with her best friend George) was miserable. In May, we went to visit our friends Stephen and Dave, and fell totally in love with their adorable pre-war Upper East Side two-bedroom apartment…which happened to be THREE HUNDRED DOLLARS PER MONTH LESS than what we were paying for our shoebox. As fate would have it, the apartment directly above them was opening up on the very same day that our lease expired. Two months later, we were in.

My favorite thing about this apartment is the fact that when Kendrick goes to the other end of it, he looks very, very tiny (it’s a railroad, so you can look straight through from one end to the other). This also means that if you leave your phone in, say, the kitchen, you don’t hear it from the bedroom. As problems go, however, this is a good one to have.

My second favorite thing about this apartment is the fact that I have space in my bedroom for a vanity. Never before have I had one, and let me tell you: it is awesome. My nighttime routine used to consist of folding myself into my postage stamp-sized bathroom and trying to extract moisturizer from the cabinet without sending everything crashing down on my head (and usually, to be honest, I just skipped it). Now, I sit down, I relax, I brush my hair, I pat on various potions…it’s a really nice way to end the day. I also love my vanity because it cost a total of $55: the mirror was free (scavenged from the garbage room at my parents’ place), the vanity itself was $45 from the Salvation Army, and they threw in the chair for nothing. I painted it myself for $10.

The vanity I originally had my eye on was a mirrored art deco piece.

But it’s a touch pricey and…I kind of like mine even better. No?