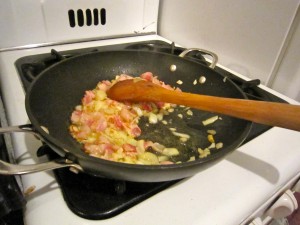 1/2 cup lean bacon, cut into matchsticks (I used a touch more, because I really like bacon)

1/2 cup dry white wine (Luisa recommends cooking wine, but I used a pretty decent Sauvignon Blanc, because, as you know, I enjoy a little imbibing whilst cooking)

1 lb tomatoes, fresh or canned and diced, any brand that does not use corn syrup (I chose whole plum tomatoes; see below)

About 3/4 box pasta (Luisa recommends Barilla Plus, which “tastes great and has extra protein/omegas”)

1. In a medium frying pan, heat the oil. Add the bacon and onion, and cook over low to medium heat until the onion is golden and the bacon has rendered its fat and is beginning to brown (about 8-10 minutes).

2. Add the wine to the bacon and onion, raise the heat, and cook rapidly until the liquid boils off. 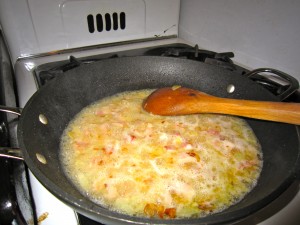 3. Add the tomatoes, thyme, salt & pepper. Cover and cook over moderate heat for 15-30 minutes. (If using whole tomatoes, like I did, you’ll have to cook for longer – at least 45 minutes – and you may have to use a fork to gently tear the tomatoes apart. Next time, I’m going to go with diced tomatoes, per Luisa’s recommendation – just so much easier.) The longer you simmer, the better it’ll be, but be careful not to let all the liquid boil off: you want the sauce to be chunky, but still have some liquid in it. 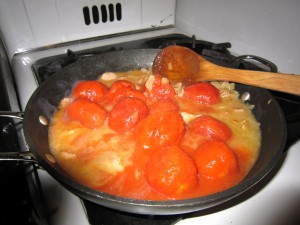 You know what I did? I totally forgot the cream. Kendrick and I were munching away in front of Superbad, but then sort of both stopped eating, turned to each other, and admitted that something wasn’t quite right; the sauce just wasn’t as rich as we’d expected. I re-consulted the recipe, and discovered my omission. Pasta and sauce returned to pot, heavy cream added, and voila: problem solved; pasta perfect.